I’m always on the lookout for a good travel deal to get somewhere new. Some of my friends are too. Occasionally – between our busy schedules, complicated lives, and interesting finances – we manage to go off and find a new adventure.

For this first TEAtime, I’m talking about my five days, four-night trip to Aruba. My trip was booked through JetBlue vacations for December 17-21, 2016. The total cost of the flight and hotel, with continental breakfast, roundtrip airport transportation and taxes, per person was $577.20USD. That works out to about $100USD per day if you think about it. This first TEAtime. will feature updated versions of my TripAdvisor reviews.

This hotel had a relaxed atmosphere. The rooms were on the smaller side and a bit dated but that didn’t bother me. My biggest complaint was that the AC could not be turned off. I don’t care how hot it is, I don’t like air conditioners because I get cold easily. I would have preferred if I could turn it on or off as needed, but this something that won’t bother a lot of people.

Outside of the rooms: the lobby was very nice, spacious with indoor and outdoor seating. The receptionists were great, they assisted with scheduling transportation and provided recommendations for restaurants and sightseeing. The pool and pool-bar area were beautiful and relaxing, and so was the beach, which was less than a 5-minute walk away. The fact that the beach was so close was honestly one of my favorite things. My second favorite was that this hotel was adult only – which meant no kids, particularly no crying kids. Aruba is a family destination. There were kids crying on the plane ride there and back, at restaurants, at the beach, all over. I always enjoyed going back to my nice quiet hotel room. The location of this hotel was also good for finding restaurants and souvenir shops, as many were nearby. As a seasoned traveler, I felt I got what I paid for – a good place to stay at an affordable rate. This is not the Four Seasons. If you want the Four Seasons, or the Rui, or some other big-name hotel, pay for that and enjoy your fancy suite. There were some kinks with Brickell Bay but overall I had a good stay at the hotel and a wonderful time in Aruba. 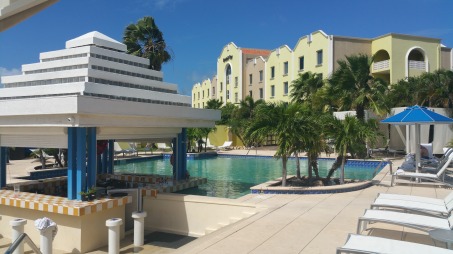 Let me begin by saying I don’t like pancakes, but I’m always down to trying new foods. I was pleasantly surprised by the taste and size of Diana’s Dutch pancakes. This was my first experience with Dutch pancakes and the staff at Diana’s made it a great first. I sat outside on a warm breezy morning greeted by a welcoming waitress. She took my order and about 10-15 minutes later she returned with a huge “pancake” topped with fish and shrimp. The pancake looked and tasted more like a large crepe to me. It was a very filling meal, though a bit oily. I paid about $14USD for the “Norwegian pancake”. A general price range for a meal here was around $10-$20USD. 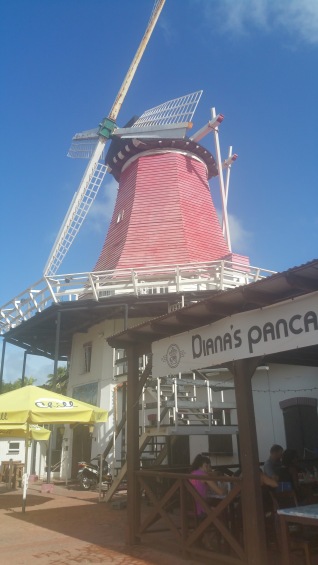 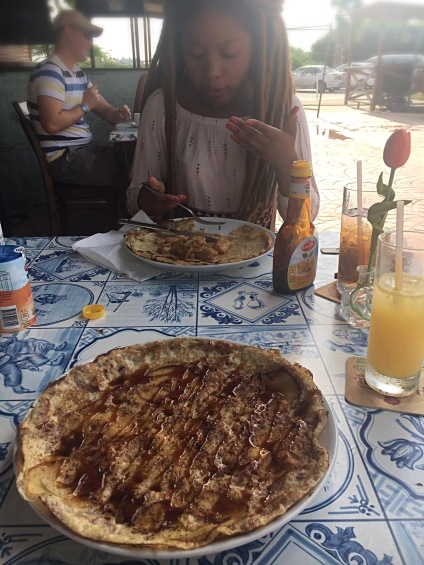 It was a rainy Monday morning when Andrew came to pick me up for my 9-hour tour. As we pulled off into the downpour I expected it to be a bleak day, but no amount of rain would dampen the enthusiasm and professionalism of ABC tour guides – Andrew, Gus, and Big G. The tour took a group of us through the entire island and it included hotel pick up and drop off along with lunch. The total cost was about $108USD, plus tax. As we drove from one sight to another, the tour guides informed us about the history of each sight and about the history of Aruba. One of the places we saw was the location of Aruba’s natural bridges.* I thought the pace of the tour was perfect. After the tour guides spent about 5-10 minutes introducing us to each sight, we then had 10 minutes on our own to explore each location. This was enough time to see the sights, take pictures, and use the restroom, at a comfortable pace without getting bored and agitated to move to the next location. The exception to this was Baby Beach, where we spent about 45 minutes swimming and snorkeling. Overall it was an excellent tour with great tour guides at a reasonable price.

*The “Natural Bridge” collapsed in 2005, an image of the bridge remains near the site of the collapse but another (smaller) natural bridge still stands nearby.

This site uses Akismet to reduce spam. Learn how your comment data is processed.